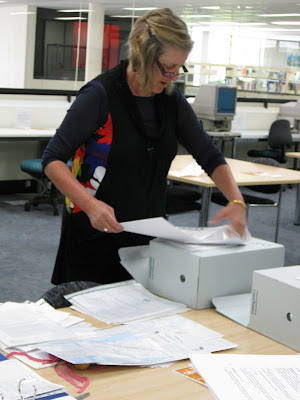 Dianna Budd working on the archive in the ACT Heritage Library.

Wrap Up Canberra was a response by a group of Canberra women to the devastation of the January 2003 Bushfires.

A group of friends, who 15 years earlier had created patchwork quilts and organised an exhibition and sale of quilts to fundraise for an ill friend, formed to co-ordinate the knitting of woollen patchwork rugs to support Canberrans who lost their homes in the January 18 fire.

The women recognised that many people in Canberra, other parts of Australia and even overseas were keen to do something practical to help those who lost everything. The intention was to create 530 woollen patchwork as a tangible keepsake representing the support of the Canberra and wider community.

A set of simple instructions for the knitting and crocheting of woollen squares to be patched together to make the rugs was developed and distributed. 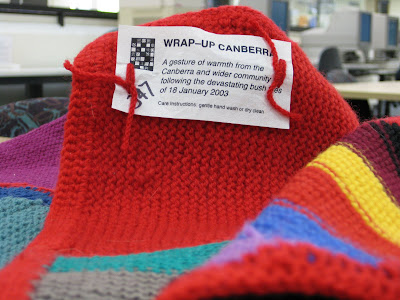 More than 2,200 individual knitters and crocheters contributed to the project from all over Australia as well as from Canada, France, Italy, New Zealand, Switzerland, the United Kingdom and the United States of America.

The rugs were exhibited at Parliament House, Canberra between 6 and 8 September 2003. Bushfire affected families were invited to the exhibition and to express interest in individual rugs. The exhibition was opened on Friday 5 September by Marlene Jeffrey, wife of the Governor General. It was her first official function and fulfilled while she was recovering from surgery.

The rugs were distributed through the ACT Bushfire Recovery Centre in late 2003. One rug is included in the archive.
Posted by ACT Heritage Library at 12:45
Email ThisBlogThis!Share to TwitterShare to FacebookShare to Pinterest
Labels: ACT Heritage Library, archives, bushfires
Newer Post Older Post Home

Libraries ACT is the public library service for Canberra, the capital city of Australia. It is also responsible for the ACT Heritage Library.